Visit their website or Facebook, and read on for a feature story about one of their houses!

Tourists flock to Colonial Williamsburg to see an intact eighteenth-century town, but there are a remarkable number of other such cityscapes that survive from the past, from Elfreth’s Alley in Philadelphia to Port Royal, Virginia. And then there’s Odessa, Delaware! 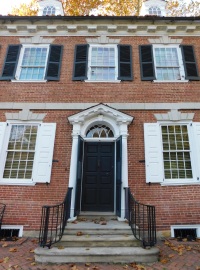 Delawarean H. Rodney Sharp almost certainly looked to Colonial Williamsburg as a model when he set about buying and restoring the historic buildings in Odessa in the 1930s and 1940s. He lent his name to several, including the impressive Corbit-Sharp House. William Corbit, a tanner, oversaw the house’s construction in 1774 and lived there for the rest of his life. Today, it is furnished according to an 1818 inventory and includes many examples of furniture made just down the street by the Janvier family of cabinetmakers.

When you tour the Corbit-Sharp House, you’ll first notice the symmetry of its “Georgian” style, inspired by British and Philadelphia architecture during the reign of the kings George. Inside, you can admire the stunning period green paint and hand-painted Chinese wallpapers in several rooms. Behind a small door in a third-story stairwell, you can see a tiny cavity in which a runaway slave, with the help of the Corbit family, hid himself in an impossibly small space to evade capture. 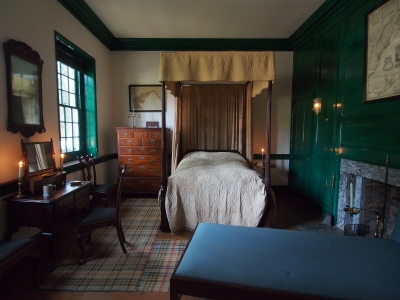 Take time to compare the impressive Corbit-Sharp House to its neighbors. The Historic Odessa Foundation includes a number of historic residential and commercial buildings from several periods, and the town gives you a chance to see how houses and social life changed over time. All this in a small Delaware oasis of history.