Visit their website or Facebook, and read on for a feature story about one of their collections objects! 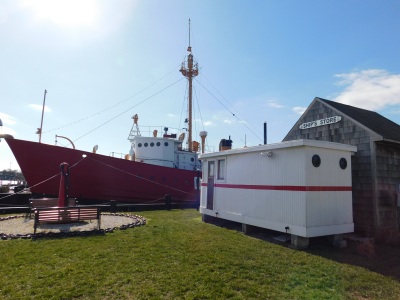 Successful historic preservation often comes down to the grassroots efforts of a few dedicated individuals. Such has been the case with the Lightship Overfalls in Lewes, Delaware. In the last ten years, a group of dedicated volunteers led by the “Dirty Hands Gang” has worked tirelessly to first restore and then maintain the ship as a museum.

The ship that now floats in a Lewes slip actually served in New England ports, not on the Overfalls lightship station off the Lewes beaches, but today she proudly bears that name in honor of other ships that saw duty there. Lightships, which served as floating lighthouses, radio beacons, and foghorns to warn vessels about navigational hazards, were common sights on twentieth-century shipping routes.

Life aboard lightships was by turns boring and terrifying. The job was isolating, as crews remained aboard the ship, tantalizing close to port cities, for weeks at a time with little contact with the outside world. Storms and shipping accidents punctuated weeks of tedious chores. When fogs rolled in, a loud horn sounded for five seconds every thirty seconds. One crewman remembered how perplexed his girlfriend was when he came ashore for a visit and could only speak in 25-second bursts.

Keeping a metal ship built in 1937 afloat, much less in presentable condition, was no small task for Coast Guard sailors, and it has not gotten any easier in the years since navigational buoys began replacing floating lightships in the 1960s and 70s. But you can see just how much the work of the Dirty Hands Gang has paid off when you step aboard the Lightship Overfalls.

Connections: Just as the Overfalls was renamed to honor the lightship station near Lewes, the B-25J airplane owned by the Delaware Aviation Museum was rechristened as a tribute to a different, famous World War Two bomber.