Visit their website or Facebook, and read on for a feature story about one of their collections objects!

By April 19th, 1861, Delaware was in something of an uproar over the impending roar. Fort Sumter, a federal military installation off Charleston, South Carolina, had just surrendered to the burgeoning forces of the new Confederacy, the group of states that had seceded from the Union that spring. Some Delawareans owned slaves and sympathized with the South, and a few even advocated secession. Others, especially in the northern part of the state, remained staunch Unionists. In Washington, D.C., the Lincoln administration realized just how important it would be to keep Maryland and Delaware in the Union, if only because without those states the capitol would be cut off from the rest of the northeast. 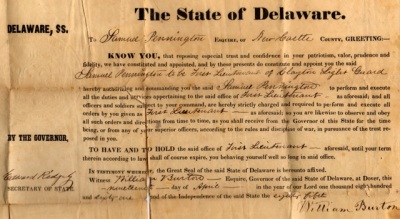 Delaware’s Governor William Burton, born in 1789, was something of a political moderate. He helped keep Delaware in the Union, albeit somewhat unenthusiastically. Nonetheless, he signed officers’ commissions for the many small militia units that proliferated in the early days of the war. Middletown resident Samuel Pennington earned one such commission on April 19th, 1861, making him a First Lieutenant in the Clayton Light Guards.

As an officer in the 5th Delaware Infantry Regiment, Pennington oversaw various guard duties, including on Fort Delaware, the military installation and prisoner-of-war camp that held Confederate soldiers on a small island in the Delaware River. After the war, he was a prominent businessman and citizen in Middletown, Delaware. And it is there, in the Middletown Historical Society, that you can see Pennington’s commission, signed by William Burton over a century-and-a-half ago.

Connections: Delawareans mobilized for every major American war. Today, the Delaware Air National Guard, headquartered in Dover, plays a variety of important military roles. On the edge of their base, the Air Mobility Command Museum interprets the complex history of air transport.